THE TAILGATE: A graphical preview of Texas A&M vs. Louisiana Tech

Dick Cheney must have known something. Cause when he pointed his Halliburton Hurricane Machine at Shreveport six weeks ago, we were all baffled that he'd want to ruin the opener of ol’ buddy 41’s favorite college team. Well, I think we all realize now that, in his replacement heart of hearts, he saw the potential in Summy and Sonny and envisioned this as a Top 25 game in a sold out roadside stadium all along. Nice work, Dick. Nice work.

Share All sharing options for: THE TAILGATE: A graphical preview of Texas A&M vs. Louisiana Tech 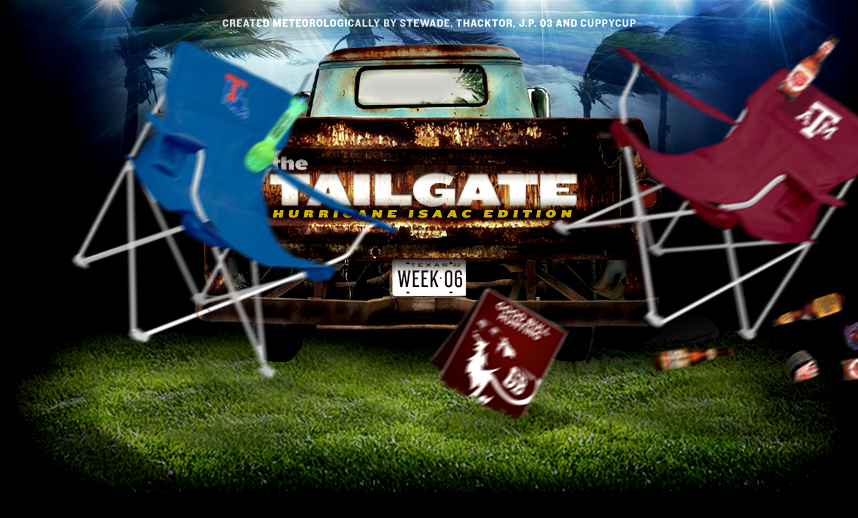 Chris Boniol went there: LA Tech in a Nutshell

La Tech is Spanish for "The Tech (feminine)." Now that we got the easy joke out of the way, let's move on with this week's hurricane-delayed Tailgate. I wrote an entire piece for the first game of the year, thank God none of that is usable because I really wanted to write another couple hundred words on Louisiana Tech.

Uninformed Smack: It's going to be difficult to make fun of the school that introduced the great Chris Boniol to the world, but I'm going to give it my best.

According to Wikipedia, the La Tech mascot is the Bulldog and they're coached by Sonny Dykes. Tech(Louisiana + Texas) = Too Much Tech. It says they won the WAC last year, which is impressive if you're in the Sun Belt or Division III. They have an active rivalry with the Bulldogs of Fresno State, which is called the "Battle for the Bone." I get it, dog jokes. Hilarious. Sounds like Lindsay Lohan's next straight-to-streaming-video blockbuster. I wouldn't recommend googling THAT particular phrase with safe search turned off. Or go right ahead. Whatever. It's your life.

Also according to Wikipedia, this is a good university. I had no idea they were the only Tier 1 university in the state of Louisiana's system. They also have a space grant. That's good stuff. I shall not mock the fact that good, educated people come out of this university. Congratulations to you, La Tech.

I will, however, submit this. Gentlemen, this is fine work. We've dipped our toes into the "make a funny youtube video" thing here at GBH and have had some success with it, but it's not this good. Seriously, they're sexy. They also know it. Wiggle wiggle wiggle wiggle wiggle. Yeah.

I don't know if dancing is enough to prepare that OL for Damontre' Moore. He's sexy and he knows it because a reporter openly hit on him in the second paragraph of an article. You can smell the tension in that paragraph. Damontre' will sack your QB a few times while texting your girlfriend. Oh, he good.

Terry Bradshaw went here, too. You remember that? Awesome.

I'm at the end of my space, so here's my prediction: Louisiana Tech will show up, WAC-off and die a miserable football death at the hands of Sumlin and the Aggies, who are looking to make a statement after escaping Ole Miss with a win in the 4th quarter. Oh, they mad. After the beating, the La Tech players will have a rough evening of trudging through their English assignment consisting of a 50 word report on "Green Eggs and Ham" (Spoiler: He ends up liking that shit. Blew my freaking mind, man.)

Manziel rattles off a better game than last week, meaning he doesn't turn the ball over three times and is responsible for 4 touchdowns, 120 yards rushing, 300 in the air, a life-saving Heimlich maneuver preformed on a fan in the first row and solving Cold Fusion by the end of the third quarter. Sumlin still doesn't let him talk to the media. You talk when Coach Damn says you're ready, son.

LOOK. I'M SORRY. I realize he's been on this list 4 out of 6 times, but YOU try and watch someone else. You can't, okay? You just can't.

The average rank of the defenses that LA Tech has gone up against thus far is a whopping 92.4 (out of 124). The best defense they've faced is #39 Illinois, who regularly plays in the offense-less B1G. This is Snyder's game to lose.

Kliff and Sonny may be calling the plays on Saturday, but this game will wreak of pirate all night long. Dusty, witch-face, suddenly beloved pirate.

Sadly, Colby doesn't look like he does on the left. He cut his hair [sad trombone]. But wait! He has a VERY good reason for it: "I think I might have to look a little more professional nowadays, getting older and trying to find a job maybe or something, so I've gotta keep it short especially in this economy." Actual quote.

As my Tailgate betting history shows, I'm nothing if not a hopeless optimist. Which is why I'm firmly convinced that we'll see the Aggies get back to their suddenly trademark turnover-free brand of football on Saturday night. My guess is that once this celebration died down after the Ole Miss comeback, CDS unleashed a tirade upon his team that was so fierce, they'd prefer the consequences of doing snow angels on the MSC grass during Final Review to fumbling the football ever again. Christine Michael probably spent the week carrying a football to class a la Darnell Jefferson in The Program, although I cringe when I think about what would have happened if anyone tried to strip it from him. Probably a fate much worse than what all those car windows suffered when Lattimer found out he made starting defense.

At long last, it's time to close the book on this non-story. In case you've been living under a rock these past couple of months, Steven Jenkins and Howard Matthews were suspended for unspecified violations of team rules prior to the season opener. When the game got postponed, the pair were magically unsuspended for the Aggies' huge conference opener against powerhouse Florida so they could sit out this week instead, a fact that did not go unnoticed by those watchdogs in the evil liberal mainstream media. Nice try, Chris Fowler. Ditto, Anish Shroff. Summy isn't falling for your tricks. He just performed the verbal equivalent of this Johnny Manziel touchdown run all over both of you. Expect nods of approval and quiet applause from our SEC brethren, right before they go back to slipping $100 bills into recruits' pockets.

A quick check of the stats tells us that Louisiana Tech averages over 53 points and almost 300 passing yards per game, so this matchup would be a challenge for the Aggies even if our defense was at full strength. Since we'll be without the aforementioned Jenkins and Matthews, however, and since Deshazor Everett and Steven Campbell are dinged up, we could be staring at our second straight ugly victory. Much to my chagrin, the Ags may give up some points on Saturday, prompting that clueless sorority girl who showed up to your watching party to exclaim "Ohmygaw, are these guys good or something? Our defense is terrible" after Colby Cameron throws yet another touchdown. But you know who else can rack up the passing yards? Of course you do. And by the time JFF is finished having his way with the completely outmatched La Tech defense, the only other comment you should expect from said sorority girl is "Awwww, that guy in the blue shirt looks so sad." Seriously, who invited her?

We’ve all seen him at 4 in the morning. He’s the guy getting killed at the blackjack table who loses everything, then vows to win it all back before staggering off toward the ATM and roulette table to try out his new Passenger 57 strategy. If you see him, kick him in the crotch and tell him to hang onto his kids’ college fund this time because it’s irresponsible sob stories like him who are keeping us from getting casinos of our own in Texas. Or don't, I suppose, if you'd rather continue to get your fix by cramming into a run-down, smoke-infested Shreveport riverboat or driving up to Oklahoma to pay a 50-cent tax before every hand. 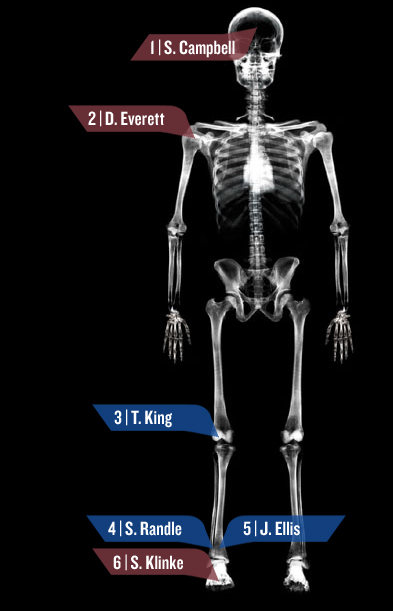 Concussion, questionable. Please, please, please make sure that Mr. Campbell is OK before letting him back on the field. Or just get him a bigger helmet. I vote bigger helmet, like 3x bigger so he leans forward more when running. Don't like my idea? Fine. That's just fine, do what you want. #passiveaggressive

Shoulder, questionable. - "DeShazor" is French for "The Strong Shoulder." This is a give up joke, deal with it. He'll play.

Torn ACL, out for season. - Bummer, man. That just sucks.

Ankle, questionable. - Two men with questionable ankles. Two men who will both play. They make tape for this.

Injured Foot, out for season. - Shep, seriously. Get a boot. A metal boot. And kick opposing D linemen in the shins, dog. Come on. 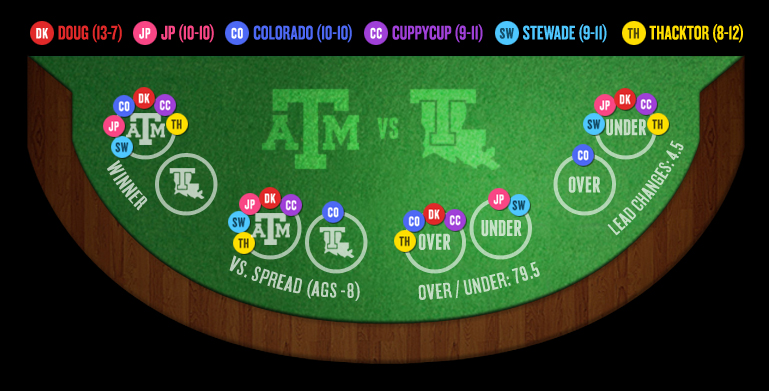 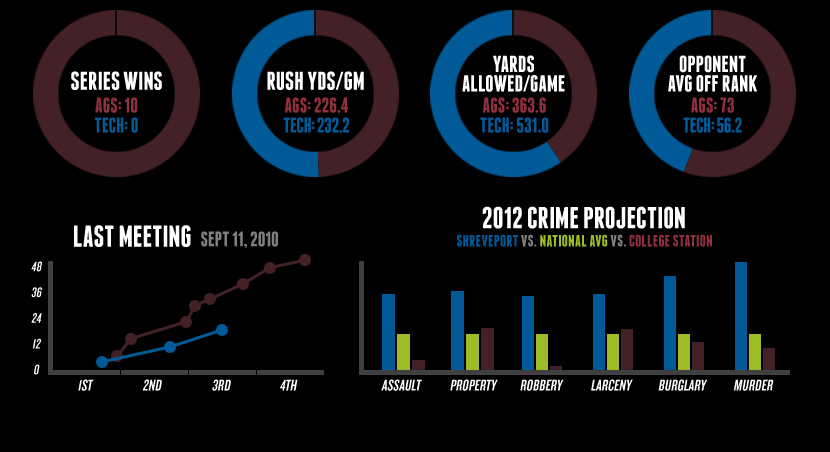 I know only one way to celebrate the fifth win of the Kevin Sumlin era: with a Meatless Stuffed Grape Leaf from Albasha Greek & Lebanese Restaurant. Stick around through Saturday night and you’ll be treated to a mouth(eye)ful when a hand-picked belly dancer will perform tableside. TexAgs’ own Billy Liucci can tell you all about it, as evidenced by the second picture in their New Years Eve photo album.

Mourn the loss (and any hope of a night game vs. LSU) by standing in front of a group of strangers and rhyme-cursing them all night long at Trapped Truth Society’s Open Prose and Poetry Reading, at 3915 Gilbert Drive. A haiku to get you started: I drove to Shreveport. I drove to EFFING Shreveport. Should have known better.

Since they were eliminated in 1996, a tie game is about as rare as a supervolcanic eruption in Yellowstone Park. Which is exactly what happens in Harry Turtledove’s new sci-fi thriller Supervolcano: Eruption. Discuss your thoughts on this book (and more) at the ArkLaTex Sci-Fi Book Club at the Barnes & Noble on Youree Dr.

Louisiana Tech's No. 23 ranking in AP Poll is highest in school history; Bulldogs 5-0 for 1st time since 1975.

Aggies sold out their ticket allotment so they are sending fans our way. Busy day here, dont miss out and get yours now!#WeAreLATech

About time one of these games went our way ! I feel like its been 10 years in the making ! #GIGEM

I like the part of Sumlin's offense where 5 wideouts run intricate deep routes and then Manziel's all like SIKE, PLAYGROUND STYLE BITCHES